I am trying to make my country and nation famous by showing excellent performance, Shahnawaz Dhani

Karachi: Shahnawaz Dahani, a young fast bowler who played a key role in the success of PSL 6 winners Multan Sultans, was given a rousing welcome on his arrival in his native Larkana.

Shah Nawaz Dahani, who is visiting his hometown for the first time after winning the title, was welcomed in front of the Police Training Center on his entry into Larkana. Citizens of Larkana and cricket fans showered flower petals on the tall fast bowler. هارپہنائے۔ Shahnawaz Dahani continued to respond to the welcome slogans with folded hands in the traditional style of Sindh. Shahnawaz Dahani was also kissed out of emotion.

Later, in a large procession, he reached his native village of Khawar Khan Dahani, a mile away from Larkana, where he was warmly welcomed by friends, relatives and acquaintances and expressed his feelings enthusiastically. Earlier, on his arrival in Jamshoro from Karachi, he was given a warm welcome. 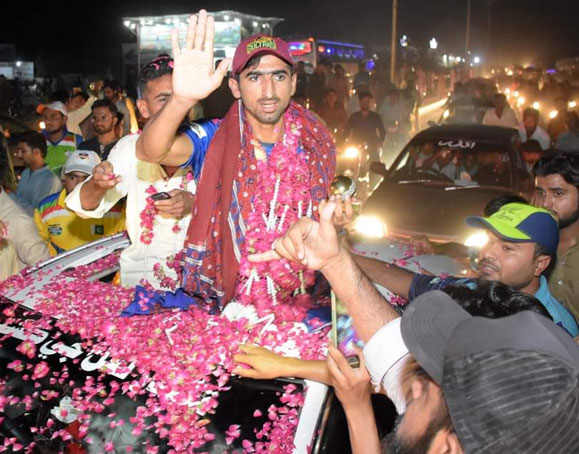 Shahnawaz Dahani, a 6-foot-2 fast bowler born in Larkana on August 5, 1998, took 24 wickets in 11 matches for the Multan Sultans in PSL 6. Shahnawaz Dahani, who was included in the PSL 6 XI along with being declared the best bowler of the league, while talking to the media, described it as an honor for him.

He said that he was very happy to participate in PSL for the first time and thanked Allah for the excellent performance. He especially thanked his fans and residents of Larkana for the warm welcome. He also expressed satisfaction over the fact that during the PSL, opportunities were provided to watch matches by installing big screens at various places in Larkana.

On this occasion, Shahnawaz Dahani urged the young players to work hard and said that I also set the goal of success due to my determination, dedication and passion. If young players also work hard in their fields, success will follow in their footsteps. Shahnawaz Dahani, a commerce graduate, emphasized on sports as well as education for the youth. He said he was happy to be represented in Pakistan again after the Test series against Zimbabwe. I hope to fulfill the expectations of my country and nation by showing the best performance.